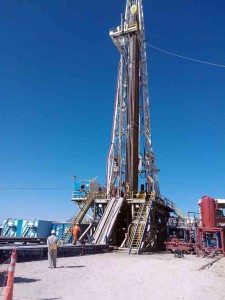 The exploration acreage
Through its wholly owned subsidiary, Major Oil International LLC, US Oil holds federal lease acreage in Hot Creek Valley, Nevada, USA. The Valley is 35 miles west of Railroad Valley, a location that has produced more than 40 million barrels of oil to date. Analysis of oil flowed by two of the Company’s wells show it to be most likely from the same Chainman Shale source rock as Railroad Valley.

The East Play
The East Play appears to be an analogue of Railroad Valley’s Trap Spring field (15.2 million barrels oil produced to 2015). After identifying the Play, the Company carried out a careful prospect assessment using well data from Eblana-1 and Eblana-3, four reprocessed 2-D seismic lines, gravity, magnetic and geochemical data, as well as VSP data from Eblana-1 and energy absorption analysis. Multiple targets were identified in the East Play, one of which (Eblana-9) the Company drilled in late 2020 but did not encounter significant hydrocarbons. The technical team is currently reviewing downhole data from the Eblana-9 well, along with all previously collected and analysed data, to revise the Company’s picture of the oil system in the East and to identify possible additional drill targets.

The West Play
Subject to funding and regulatory permissions, the Company expects to drill a further well or wells in the west of its acreage, where the current basin model indicates a structural analogue of Railroad Valley’s Grant Canyon field. Grant Canyon historically included the most productive onshore well in the USA, flowing at over 4,000 bopd. In this area, the Paleozoic strata rise to relatively shallow depths, allowing for relatively low-cost wells. Intensive data analysis and modelling efforts and prospect appraisals are now almost complete and are expected to confirm multiple prospective drilling locations.

Legal issues concerning certain leases
A legal case has been brought against federal agencies by an environmental group challenging the award of oil exploration leases in Wyoming, Utah and Nevada in June and September 2018 federal auctions. Leases held by Major Oil in Hot Creek Valley, in total 52,046 acres, are impacted by this ruling, which suspends operations on the affected leases but does not void the lease awards. The suspension order is currently being appealed by federal and other bodies.  The Order has no impact on the Company’s current view of drilling opportunities or development potential in East or West Plays.
Further details here.

Resource Estimates
On February 2, 2017, on the basis of all available data, including Vertical Seismic Profile (VSP) data collected from the Company’s Eblana-1 well (processed by Halliburton), and after a review of petrophysical parameters, Baker Hughes Inc. reported a Best Estimate for Contingent Recoverable Oil (20% recovery factor) of 206.6 million barrels.

On completion of a revised oil system model, resource estimates will be subject to revision and may decrease or increase accordingly.